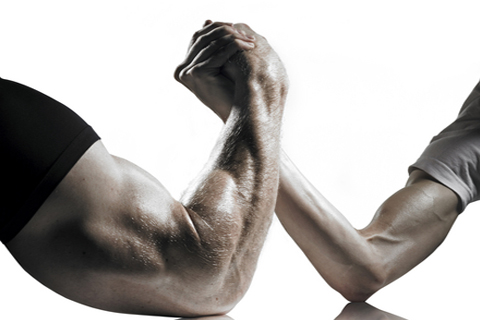 After a drastic (or what I thought drastic) 10 minutes with the tape measure and a decreasing level of low self esteem I find myself writing up this article not about the size of my manhood, no, but the on-going battle I have with muscle and my motivation to build the stuff.

In the nine years I have been eating and training religiously and I have been lucky enough to train with some of the most well respected fitness professionals/athletes across the world from the likes of Phil Learney, Rob Riches, Neale Cranwell and not to mention my own team here at MPH Fitness – combining their knowledge with my own, you would think that I would be well on my way to be a strong muscle bound horse consuming battle beast?!…. but alas I am not. Why? Well, in the following article I am going to share my experiences of what it is like being a natural ectomorph in an industry and a society that aspires to the cover model physique. Welcome to the Diary Of A Hardgainer: Part 1.

Over the past year I have been looking into more and more forums in search of people like myself who struggle to gain muscle. Here are some of the questions and statements that I have found (If you find that you are asking any of these yourself then this article will apply to you!):

“Why is it that when I wake up in the morning I look half the size I was when I went to bed?”

“Why can I build some of the areas of my body but not the others?”

“I eat over 4000 calories a day of good quality protein, carbs and fats and yet I don’t seem to be putting on any size?”

“Why is it so hard to maintain, let alone build?

“Why can’t I build bulky abs?”

“I always look so thin from the side!”

“I eat and train so much but get limited results, I must have low test or something, my genetics are busted!”

“I am over 6ft and have long levers; will I ever look like I train?”

I have watched some of the answers that people give and it is the same old drone rubbish you get all the time. All I ever hear is stuff like ‘eat more than you use’ or ‘for every kilogram of bodyweight eat 2g of protein’ or ‘do GVT for the best gains’. This sort of nonsense doesn’t help man nor beast because at some point the body will adapt and no gains will be made, plus the ecto client will have probably tried all of these methods anyway. I will try my best to answer all of these questions in Part Two but they will all be from my own experience rather than researched methods, because as we know, a lot of those methods don’t really work on us!

So here we go, I am laying it all out on the table. Part one will be mainly on my physique breakdown over the past nine years. This will give you a good insight as to the progression and I will show you in Part Two where I, and many other hard gainers, go wrong. It will show you the point at which I was at sub 5% bodyfat and the point where I was at my heaviest of 110kg at 25% bodyfat. Below each stat I will give an account of what my nutrition, supplementation and training was like. I will also give you an account of how my life changed in certain areas. Unfortunately I don’t have any pictures of me when I started so you will just have to take my word for it.

As you can see at 20 I was a very slight, light lad. I got into training and here are my first year’s stats:

Notes: I trained 6 times a week and often for two hours each time. I had no idea what I was doing so the workouts were scrambled. I just remember hitting every muscle group every day for the next two years. I made significant gains in the first year but they very quickly stopped after about 6 months! I had also noticed lack of symmetry between most muscle groups and scoliosis of the abdominal wall. My nutrition habits were just to consume as much as I could – a no holds barred approach. Did this ruin my next 8 years or was it already ruined? Part Two explains a theory.

Notes: As you can see two years later I had put on a significant amount of…………Weight! All measurements are higher but how much of this is muscle is difficult to tell now as I did not do a muscle mass test. The reason for the drastic increase was down to more structure eating habits and the introduction to a years’ worth of Creatine Monohydrate. I looked awful and had severe rounding of the shoulders and over worked biceps. I rarely trained legs. A wasted two year experience?

Notes: After 4 years of lifting I thought I would get serious. I met up with my pal Rob Riches and he geared me through my first cutting phase. Calorie deficit with mainly periods of conditioning work crossed with standard hypertrophy. I had also converted to using a lot of natural fat cutters and had come off the Creatine Monohydrate. As you can see I dropped a few inches off most body parts and got into some great shape. I spent the next 2 years in this condition doing some fitness modelling here and there. With these measurements at that weight I felt small and skinny. The muscle just did not seem to ‘hang’ off me like it did with Rob and my other pals (see photo below of Rob and my good friend Tom Dyer), even though I worked my ass off eating and training. I began to question whether there was something wrong with me, so off I took myself to the docs. Bloods and hormones were done and I was told that genetically, I could not get any bigger. Stuff that, it was time to ‘bulk up’ again. 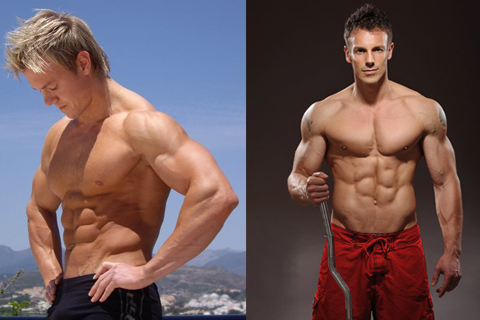 Notes: Could not get any bigger? Yeh right!………Whilst bulking I flew to LA to visit Rob on holiday and unfortunately blew my back out (slipped L5/S1 disc). Gone I thought were my days of lifting. The next one and half years were hell and I basically ended up getting huge as you can see from above. I was the biggest I have ever been and felt awful. My strength was below par and I wasn’t working my legs as hard as I was used to. Training ended up being a mixture of rehab, strength periods and small periods of low intensity hypertrophy. This leads us to 2011/12.

Notes: I am back down to a comfortable bodyfat level where things can only better. Most of the stats have come down but that will be down to fat values. For the past two years I have really focussed on exercise selection and weak areas whilst constantly varying my training period from strength protocols to GVT to FST-7 to simple hypertrophy methods. What I rarely do, and all you purists will kill me for, is that I never approach plyo’s mainly for the safety of my back more than anything. I rarely engage in cardio conditioning work and we will come to that in part two. I have implemented some form of Intermittent fasting just to decrease the fat over the last year but now I am back on to 5-6 meals a day. Nutrition needs to be sharper.

As you can see in the last 9 years there have been some significant gains. It is safe to say that from the period of first measurements (2004) to 2012 there has been approximately a 3 inch gain in small muscle groups and an average of a 5 inch gain in large muscle groups. Is this the standard gain for most people in 9 years? I hasten to say it probably isn’t and I have got a long way to go before I look like Rob or Tom. I still feel like the muscle doesn’t hang off me but I am not sure it ever will. We will tackle this along with answering some of those earlier questions in Part Two. Watch this space……………

This article was written by Matt Hodges, you can see all his articles here.

Be A Boss At The Pull Up
6 July

Why Fish can boost your workout
1 October

The Ultimate Cheat Sheet On Caveman Fitness Training
5 May

The Anatomy Of A Great Abs Workout
27 February